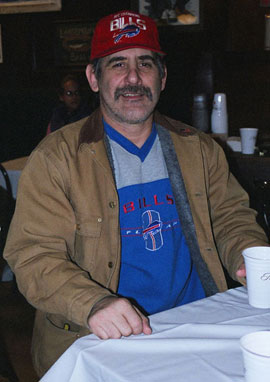 When asked to talk about himself, Victor Cohen replied, “I was there in 1980 when the Bills beat Miami.” He was referring to that 17-7 win in Orchard Park that finally snapped the Dolphins 20-game win streak over the Bills that had lasted an entire decade.

Cohen used to work sideline security at Ralph Wilson Stadium in those days. He even made national news once for an incident during which a crazed fan ran out onto the field. But now the 51-year-old college professor, who grew up outside of Buffalo, lives in downtown Manhattan, and has a daughter that goes to Kent State. She’s 24, and when asked if she was a Bills fan too, Cohen replied, “Oh, yes!” and is a fellow Bills Backer in the Columbus chapter, he said.