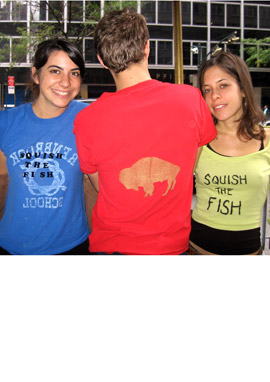 Kevin, of unknown age, but approximated to be about 23 years old, came to McFadden’s on Sunday wearing his custom-made, red, “SQUISH THE FISH” t-shirt with a buffalo spray-painted on the back.

He was all smiles as the Bills went on to beat those evil Dolphins, and Kevin and his friends passed around electric-blue, T.K.O. shots to everyone. Kevin’s friends are not from the Buffalo area, but they all lie on Kevin’s behalf and say that they are – telling people that they are from Lockport, which is where Kevin grew up and about 15 miles north of Buffalo. It’s quite obvious that Kevin has done his part in spreading the “word.”

As far as his favorite Bills player, Kevin says it’s Brian Moorman, which love affair was sparked when Kevin found and bought a t-shirt that was autographed by the “pro-bowl” punter at the Salvation Army in Buffalo some time ago. The Meadowbrook Farms shirt reads: “To Tim, Stay in School. -Brian Moorman.”

Now Kevin lives in Bushwick, Brooklyn and has been coming to McFadden’s since 2003. On McFadden’s, Kevin says: “Where else would you rather be? I’m here at noon and drunk and passed out by 7.”

Thanks Kevin, and Stay in School.