It’s finally here, the 2019 Buffalo Bills season kicks off in just a few days right here in New Y…er…New Jersey. Expectations are very high for this team, especially Josh Allen. I personally have tempered expectations, feeling the defense will be solid but the offense will take time to gel among all the new faces. I also think putting all the pressure on Josh Allen this season is a bit unfair, he still is a work in progress, I honestly think the team will hit it’s stride late in the season. Playoffs? Possible, but I think next year is when they make a legit deep playoff run.

No matter what, this team is gonna be fun as hell to watch and could take a lot of teams by surprise this year.

With the first two games of the season being here in NJ, we’re doing a bit of rinse and repeat:

SUNDAYS @ MetLife Stadium – For both Sunday tailgates, hundreds of Bills fans will be meeting up in Lot 26, Pole A. It’s directly under the “ski ramp” of the defunct mall complex next to the stadium and is connected to the main parking lot by a walking bridge. 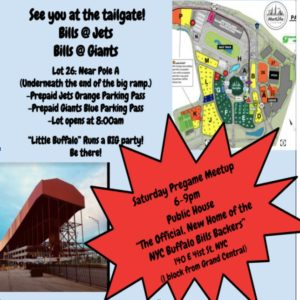 Sadly you won’t see me at MetLife for the games as I’ll be holding down the fort at Public House to help get our new home situated, but I hope to see many of you there!

Leftern GameDay Series:
Leftern Gameday Series is a project that connects people to the creators within Western New York while supporting foundations making a difference in the community. There will be a limited edition print designed by local artists available for each of the Bills home games as well as a couple of the away games. A portion of the proceeds will be donated to local foundations or families in need.

Leftern believes that this season should be played in Ezra Castro aka Pancho Billa’s honor, so we decided to dedicate the Week 1 print to him and his family. The print was designed by Morgan DiGangi and depicts NYC legends in Pancho’s gear. There were only 150 copies printed and are 10$ each. A portion of the proceeds will go directly to Ezra’s family. We want to make sure his spirit lives strong across Bills nation and beyond. You can buy these prints at Public House on Saturday night before the game, at the official tailgate on Sunday, or on www.leftern.co. Stay in the loop with more of our upcoming projects and events on social media @lefternco.