“My advice to you is to start drinking heavily.”
-Bluto, Animal House

As a public service: ladies and gentlemen, introducing Trent Edwards and the 2010 Buffalo Bills offensive line: 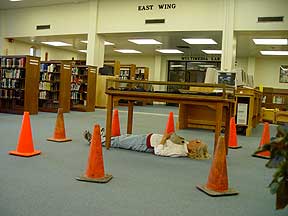 Yes, Bluto is onto something.

I joked to some friends several weeks ago that if the Bills do everything right – leverage their strong running backs, figure out a way to more effectively use Roscoe Parrish, concentrate on screens and short passes, all while periodically going deep to Lee Evans to keep defenses honest…there’s no reason they can’t score 6-10 points a game.

Well, maybe I was wrong, because they managed to score 10 against the Fish while doing all kinds of things wrong. But, it wasn’t pretty. So, to once again invoke Bluto (and, if you haven’t seen Animal House, you should), “Grab a beer. Don’t cost nothin.” Well, not “nothin,” but the McFadden’s and Calico Jack drink specials are as close as you’re going to get in Manhattan.

In that spirit, Five Things That Were Good this week:

1) The defense was strong. Happy to see Leodis McKelvin’s contributions.

2) Chan Gailey seems to be telling his guys he believes in them; hence, the decisions to play aggressively with seconds remaining in the first half, and to go for it on 4th and long in the fourth, leading to the Bills’ only TD. I’ll admit I was initially against each choice, but I definitely get the logic.

3) Freddy Jackson and Marshawn Lynch seem to have some chips on their shoulders, in a good way. That’ll put healthy pressure on CJ Spiller to produce. Personally, I think there’s room for all of them this year.

5) The bars were PACKED, and the staff was great. OK, sure, we lost satellite reception on some screens at Calico Jack’s near the end of the game, but they fixed it ASAP.

Check out photos from our staff photographer, Mike Coniaris, on our website, http://nycbbb.com/pics/fins10a.shtml.

See you next week!