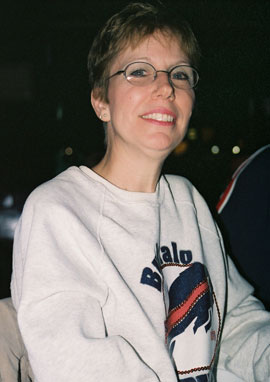 “Debbie Does McFadden’s.” That’s what Debbie said about her first trip to our bar. She was visiting her son for the holidays, and the two of them cheered for the Bills together from the dining room. They’re from Lockport, just north of Buffalo, though Debbie was raised in Tonawanda.

Debbie, now a 52-year-old Weight Watchers weight-technician, said that she’s been a Bills fan her entire life and remembers the O.J.-years quite well. Her husband helped remodel Ralph Wilson Stadium back when AFC Championships were being won inside. And for her son’s birthday, that’s where Debbie took him.

Her son, John, a 27-year-old golf-course superintendent lives in Connecticut. But he journeys to McFadden’s every Sunday. Debbie raised him right.