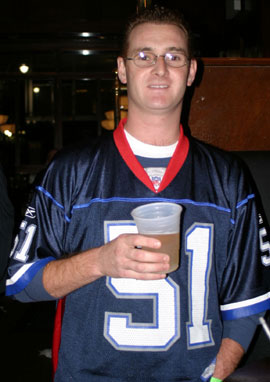 Born in Dublin, Ireland, Norman moved here in 1994. He didn’t follow football before he moved here. In 1994 he met me (Anna) and has been a Bills fan ever since.

He has only been to McFadden’s about five times. He would love to make it to more games in McFadden’s but because he is a bartender in Sunnyside, at Sidetracks, he doesn’t usually get home until 6 AM.

We were at the game at the Ralph, front row seats, against the Texans when Travis Henry broke his leg.