OK, so work and work travel prevented me from writing the past two weeks. So, to catch up…

The Ravens game: Amazing – we ran like crazy (which is good, because we still almost found a way to lose). But, beating the defending champs? No doubt a harbinger of great things to come. EJ’s indestructible, right?

The Browns game: Um, maybe not. All kinds of ugly. And now…welcome Thad Lewis, the living embodiment of an old Seinfeld routine that we don’t root for players as much as we root for clothing.

Fans of the Week:
These guys have been patient waiting for their fan of the week article, but as you can tell by the photo, they’re clearly laid back, patient guys. 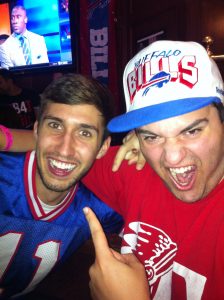 “These guys,” from left to right, are Kyle Zappia and Patrick Crowe. Kyle, who just started a new job with MTV, comes from the sprawling metropolis of Newark, NY, while Patrick, a financial analyst at Bank of America, is the pride of Clyde, NY. They’re both relative newcomers to New York City – when I took this photo during their first-ever McFadden’s game when the Bills beat the Ravens, Kyle had been in town for about 18 months, while Patrick had arrived only three months before the Ravens game.

Like so many Bills fans, they describe themselves as “Bills fans forever.” Kyle’s fandom was cast in stone as a seven year old serving as a ring bearer – he was offered an autographed photo of Jim Kelly if he’d just hold the flower girl’s hand. Patrick, it pains me to type, actually started off as a Pats fan (maybe because of his name?

But, I’m not a Phils fan in baseball, so who knows…), but had wholeheartedly joined the Bills family by the time he began college.