FAN OF THE WEEK 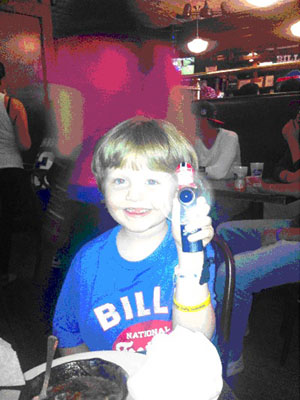 Welcome back, Bills fans. There’s so much out there on the web about the Bills that I’m now devoting this column to resurrecting Fan of the Week – a chance to get inside info, the dirt, about the people we watch games with.

I’ll kick off each column with a quick “Snap Impression” – my top-line takeaway on the latest game.

SNAP IMPRESSION: The more things change….Look, there are no moral victories. But, I thought EJ was really good. So were the Jell-O shots provided by NYCBBBer Alex Valentine. The penalties and run-defense…not so much. But, EJ, CJ and Fred Jackson give me hope against the Panthers next week.

On to our Fan of the Week…

The fine young man pictured above was the youngest fan in attendance this past week – seven-year-old Thomas Kabel: son of Nicole and Matt, brother to William and Sally. Thomas bravely marked his near-debut at McFadden’s in a week-one Pats game (he attended a game when much younger, which he doesn’t remember.)

I’ll admit that the noise level of McFadden’s – and the allure of a nearby iPad – made interviewing Thomas for this column kind of a non-starter. But, come the second half, Thomas was clapping along to Shout!, high-fiving and having a blast whenever he took a break from his apparent goal of sampling nearly every food item on the McFadden’s menu.

He did answer one question for me, though:

“Hey, Thomas, what’s your favorite part about being here?”

Good answer. King Kabel might have a future NYCBBB leader in the making. I look forward to being his 70-year-old loyal subject one day.

On a side note, let me put in another plug for our Sally Kabel fundraiser during next week’s game. More info on the way, but there’ll be plenty of prize opportunities.