It was halftime. The Bills were kicking the crap out of the Cardinals on a windy and rainy Halloween day at Ralph Wilson Stadium after Willis McGahee scored his first rushing touchdown of his career. I was dressed in a hula skirt and Hawaiian shirt, Matt had an afro wig on, Kevin was in a 70’s pimp outfit, and Ryan was dressed as a preppie. We had Marilyn Monroe and Little Bo Peep sitting at our booth, and some refs throwing yellow flags at us, as well as a Bills fan in a red, white, and blue quilt. The beer (and in my case screwdrivers) were a’flowin and everybody was happy.

I was just about to get some wings when Phil Mann came up to me and said, “Hey Matt, I think somebody famous is outside.” So I headed in the other direction and out the door and looked over the small crowd to see Tim Russert – chief of NBC News, host of Meet the Press, and best selling author standing there talking to fans. All the guys talking to Tim looked at me and introduced me to him. I just looked at him and said, “Just figures that the one day in my life I have a skirt on I meet Tim Russert.” He came in and talked to fans, signed autographs, and rooted for the team with his Buffalonians as we gained a 31-7 lead, after which he had to get back to work covering the big election over at Rockefeller Plaza (known this week as Democracy Plaza)

I just wanted to thank Ted Kresse, who runs our group down in DC and also works for Tim Russert, for bringing him to McFadden’s. Teddy and I were alter boys at the same church and it was the first time I had seen him since I was a kid. Here is a picture of NYCBBB’s staff with the host of Meet the Press outside of the bar (after some of us removed our costumes!): 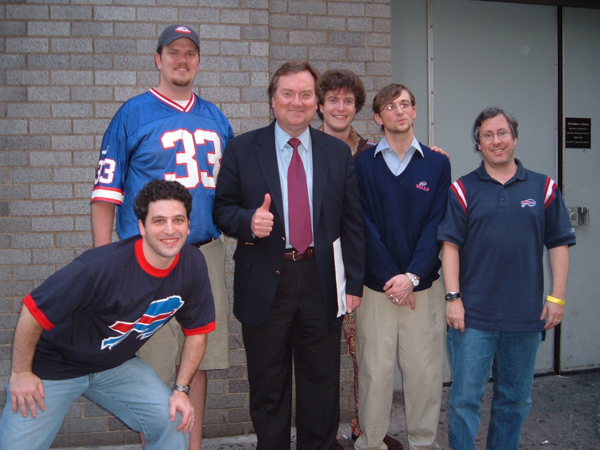 Bills 38 Cardinals 14
Check out all the news from yesterday’s win at www.billsdaily.com

Jets/Bills
We’re only a few days away from NYCBBB’s trip to Buffalo to see the Bills destroy the NJ Jets! I will be sending more info this week for our tour of the stadium and happy hour.

Congrats
Joining member Mike Jason in getting wed this weekend was member Tom Devereaux. Tom was married in Buffalo this past weekend, and is one of our original members who decided to move back to the Queen City last year. Congrats Tom!